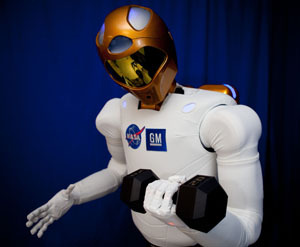 At the end of this month something will happen that is taken straight out of Chapter One of the basis of most science fiction novels: Space Shuttle Discovery will transport a humanoid robot will work alongside humans, in space.

I don’t understand why there hasn’t been more publicity of this game-changing event. The ‘geeky press’ such as Register and PC Pro have been covering R2 for the last six months, but it hasn’t been covered in the mainstream press.

R2 is an amazing milestone. Take a look at the video below where the robot folds a large piece of paper. In years to come we’ll look back at these activities and laugh at their simplicity. In the meantime, in 2010, these activities are extremely complex to do.

R2 will take care of what computers and robots do so well down here on Earth – constant, repetitive tasks. The astronauts will simply ask the robot to help with a task, and as time goes on, they will be able to replace the lower half of R2 with different components, such as wheels, claws and other things to help it replace the kinds of tasks that endanger humans miles above the Earth.

This is a real milestone for both mankind and technology. Well done to NASA and GM for sponsoring getting the genie out of the bottle.

2 thoughts on “A true milestone will happen on November 30”