The Snowden Files is a good, factual spy book, which makes you think more about data privacy, whatever your current view is.

When we started doing some work with Bitcoin at Endava a few people sent me some interesting article about The Dark Web. Bitcoin and The Dark Web are unfortunately intrinsically linked. The Dark Web is a fascinating subject and I’m working on a more detailed post for future publication. One of the avenues this subject sent me down was online privacy.

I don’t mind that government spy on my electronic communications. I have nothing to hide. I belong to countless social networks and comment on other websites, so I probably have a large digital footprint. I don’t mind that the government can switch my phone on remotely (according to Snowden it’s easier on an iPhone), and listen to the microphone without me knowing – they have more important people to investigate than me.

So I bought the Snowden Files to gain a perspective from the other side of the argument.

Edward Snowden was employed by a number of US spy agencies and worked on some mass surveillance projects, mostly American and British citizens. He found this immoral and told The Guardian newspaper what the US and UK agencies were doing. Snowden is now in Russia, claims not to be a Russian spy, and is not allowed outside the country or else he’ll be arrested wherever he visits.

The book is well written. It’s written by Guardian journalist Luke Harding and towards the end is a chapter describing the media response to The Guardian’s actions. The rest of the book is written in the style of a fictional thriller, with Snowden travelling around the World including places such as Hawaii, Hong Kong and Romania. Snowden’s introvert, often meek personality is well described, intertwined with his spy training, and there are some spy techniques described in the book to add to the suspense.

So, the question is whether The Snowden Files changed my viewpoint. Sort of. I still don’t mind that the government spies on my phone calls and Internet usage. At the same time that I reached the final part of the book, the UK government announced that school teachers should tell on pupils (see the newspaper photo above). The book helps you understand more information ‘behind the newspaper story’.

I object to those US senators and UK MPs which appeared at public hearings and denied the actions uncovered by Snowden. I also object to any content being copied and distributed by system administrators in government agencies when they discover something funny or personal.

I also found myself objecting to the US and UK eavesdropping on the leaders of friendly nations. 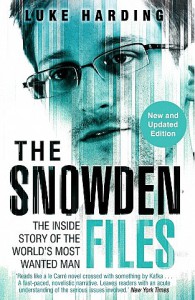 The book is clear how Edward Snowden differs from Julian Assange, Mr Wikileaks, who is now a fugitive stuck in the Ecuadorian embassy in London. For instance Snowden didn’t want to reveal any information about individuals – he wants to focus on his moral issues with government eavesdropping programmes.

Those programmes are described in the book – such as buffering the transatlantic fibre links linking the UK and US for up to 30 days, and collecting mass data from mobile networks, capturing the data between the data centres of social networks and other cloud companies, all without any knowledge, apparently, of those companies.

What does this mean for companies and individuals? Well if you are worried about governments reading your files or emails on cloud services, it doesn’t really matter if you encrypt data because governments are listening at the network layer (the data being transferred between data centres and organisations). The data must be encrypted at source, then emailed between computers still encrypted. And besides, a lot of the encryption can be decrypted by governments anyway.

One argument for all this snooping and data capture is that it enables governments to find more terrorists. Governments announced that they need to sift through mountains of data to find information to foil future attacks. Critics of Snowden in the media and governments unanimously give the anecdote of finding digital needles in large haystacks.

But incidents have occurred, such as the Boston marathon bombers, and the book describes how Russia’s FSB had apparently warned the US about beforehand about the specific individuals beforehand.

What the book describes well is how we, Westerners, expect Communist governments to spy on its own population. We don’t expect Western governments such as ours to spy on us. The newspaper headline above, announcing that teachers in the UK are to inform the government about students has an East German aura, but somehow seems acceptable in the UK today.

Fundamentally though, I still don’t mind the government spying on me though. Because I have nothing to hide.

Since reading Snowden Files, I have noticed how many people I know who are using anonymous browsers such as Tor, which don’t store cookies and use other techniques.

My advice is this – firstly, don’t be a terrorist!! Secondly, if you are concerned about your privacy, use an operating system such as TAILS, and use a browser such as Tor. Use encryption on your computer and avoid hosted storage services. And don’t take nude photos.

1 thought on “Book review: The Snowden Files by Luke Harding”