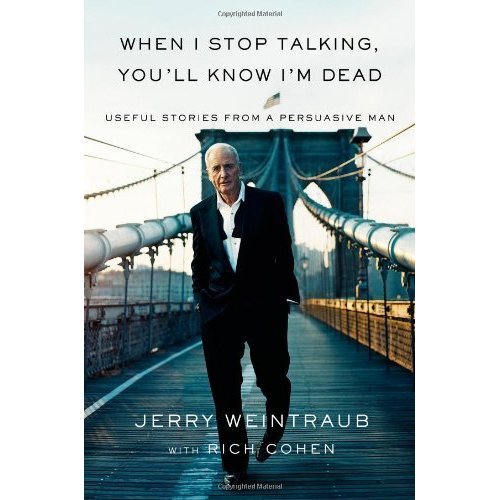 Actually, the full title of the book is “When I Stop Talking, You’ll Know I’m Dead: Useful Stories from a Persuasive Man” by Jerry Weintraub.

I confess that I’d never heard of Jerry Weintraub before. The thing that jumped out at me on the back cover (written by George Clooney) was that he produced the films (if you don’t know what a film producer does, this book will explain) Ocean’s Eleven, Twelve and Thirteen.

He’s done a lot more than that in his colourful life, from playing tennis with both George Bushes (together), taking Elvis and Sinatra on tour (separately), managed George Clooney, Brad Pitt and Matt Damon, as well as learnt how to deal with the mafia (tell the truth and keep the law). Not bad for a child from the Bronx 70 years ago.

He happily divulges his secrets – he doesn’t think he’s particularly clever, just persistent and excellent at sales. And he demonstrates the same sales process time and time again. One of my favourites was selling the LP sleeve of a John Denver album before Xmas (sending it top of the charts), without the record inside! Because Denver was late finishing the record, and Weintraub sold everyone the concept that you’ll get the record later. Hilarious, ridiculous, and gutsy.

He also did a thousand other things which most of us would love to do, each in it’s own entertaining way.

The book is really easy to read. I found myself hiding in corners of the house on the weekend trying to read it quicker. I had a bath on Saturday evening (which I only normally do when I have a bad cold) for an hour while I read it. And I must confess it was I who blocked the escalator from the Northern Line at Bank station this morning because I was midway through the chapter on Dancing with the Rebbe.

OK, there’s a liberal dose of American-yeehar-I’m-so-successful in there, however you can see that he tries tempering this with the love for his family (parents, brother and children) and friends. His thoughts on death and religion were like having a conversation with a close friend.

And that’s the book’s style – it’s like he’s there next to you telling you lots of interesting stories. I still don’t know what his voice is like, but I feel like he’s been talking to me all weekend!

Thanks to Alex for lending me the book. Alex asked me to pass the book on to the next person. Just remember I spent an hour in the bath with it on Saturday.