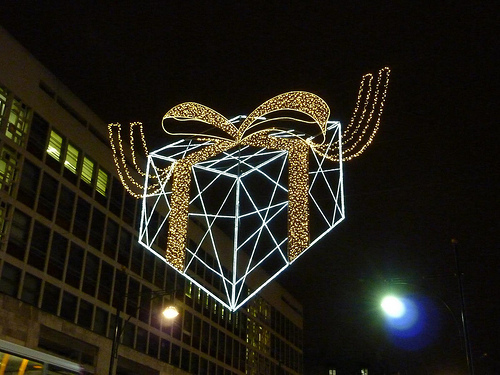 Fifteen years ago, even five years ago, the Western world was buying discs and tapes of films, music and computer games.

At least the retailers on Oxford Street could sell something because yes you can still buy a physical DVD or BluRay, but it’s now easier to download an ‘on demand’ movie via Sky, cable or BT Vision.

Music CDs? In our house we use Spotify (Premium – so that we can use the iPhone app in the car) to listen to music. I haven’t bought a music CD for years.

The one physical format that has stood the test of time is computer console games. Although you can download demos for the Wii, PS3 and XBox, most consumers still need to buy a physical disk for the latest releases.

Perhaps the main reason for still needing a physical disk is the price point. A music ‘album’ (how much longer before no one understands what that word means?) costs under £10 on Amazon. Watching a film on BT Vision and Sky is under £5. Compare those costs to the latest football game, FIFA 12, which is £43 on the PS3 and Xbox. Perhaps buying a product for over forty quid is too much for a virtual object.

There’s also a school of thought that because most games are bought as presents, you need to be able to wrap and hand it over. I don’t necessarily agree with this because a console such as an Xbox has a much higher age group and the gift element doesn’t apply so much. And personally I’d welcome downloadable full games because my kids wouldn’t be able to scratch the disks without any possibility of exchanging the useless £45 circular plastic.

Back to FIFA 12 for a moment… at the time of writing this post:

(All those prices are from Amazon).

At least if you do visit Oxford Street this weekend, you can download FIFA 12 to play on your iOS device while the lights are being put up.