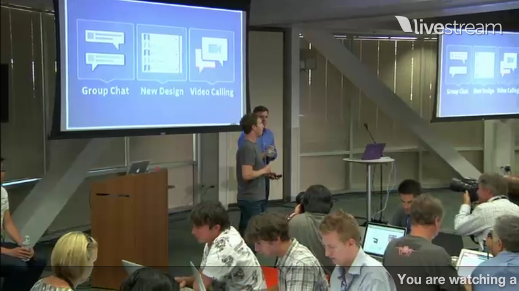 Today Facebook held a live session to announce their integration with Skype to enable video calling between users, presumably as a quick retaliation against Google+’s advanced video calling technology.

There were a few twists in the online session (around 54,000 people were simultaneously watching) delivered by Mark Zuckerberg and Tony Bates (CEO of Skype):

When the camera panned to the audience – all the audience were on their laptops, presumably tweeting. And nothing annoys me more than people who constantly tweet at conferences. How do they listen to (and understand) what is going on?

Mark Zuckerberg is one of the most influential people over the course of the Internet, and his live audience in the room weren’t even looking at him – see the photo above. Six months ago when Mark Zuckerberg spoke, the room paid him 100% attention and thought he was the greatest thing since the Google search engine.