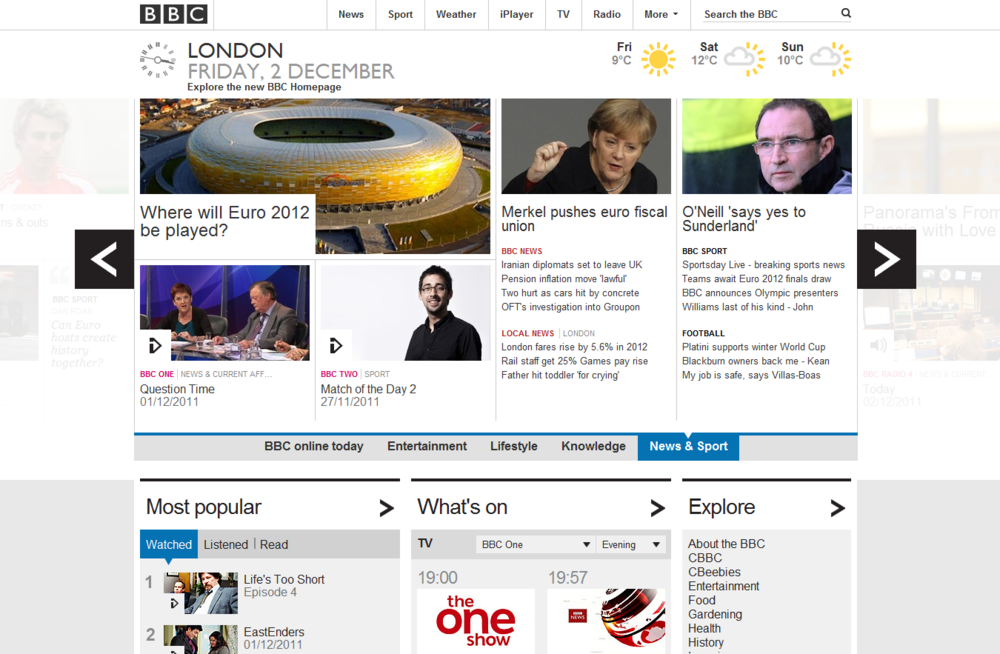 So, the new BBC Homepage has now been rolled out for all users as the default landing page for bbc.co.uk.

The BBC have a huge usability challenge. The site covers everything from the most popular news website in the UK to CBeebies, from the excellent iPlayer to detailed microsites on most scientific explorations.

There’s a huge amount of content on the site, and sections of the site aimed at toddlers who can’t read to silver surfers.

In my opinion, the new homepage addresses the usability challenge very well. I like the 3 tabs along the bottom as different ways to browse content (Most Popular, What’s On and Explore).

The new toolbar at the top is very Mac/ Google-esque, providing the most common links throughout the entire BBC web estate. At the moment you can see the style of the toolbar changes across this site, and I expect this to become common over the coming months.

Finally, there’s the scrolling features area at the top of the site. Very iPhone-ey (no pun intended). Great on a touch screen but with a mouse it’s quite fiddly. It’s the same as the new version of Chrome, with the ‘Apps’ and the ‘Most Visited’ sliding navigation. Great on a phone, poor with a mouse.

Next year will see an explosion of touch screen PCs once Windows 8 is released. Earlier this year I considered buying a touch screen PC for home, but human hands (and especially my children’s hands) are too greasy to consider using on a flat surface. We bought a standard PC in the end and it still annoys me how many fingerprints appear on the [non-touch] screen.

I was in a meeting yesterday with a few people, one of them with an iPad. One of the guys turned to the iPad user and said “You use the letters ‘e’, ‘u’ and ‘s’ a lot, judging by the state of your screen”. The iPad user replied with “Interesting you say that, because my boss’ name is Sue”.

Back to desktop touch screens – I don’t think we’re ready for touch screen’s yet. It’s solving a problem that doesn’t exist – I’m faster typing and navigating with a mouse and keyboard than colleagues with an iPad.

In summary, I like the design of the new BBC homepage. It solves a huge challenge really well, by consolidating a huge site into a number of easy to use components and promoting some of them nicely. Now I need to use it with clean hands and a touch screen.