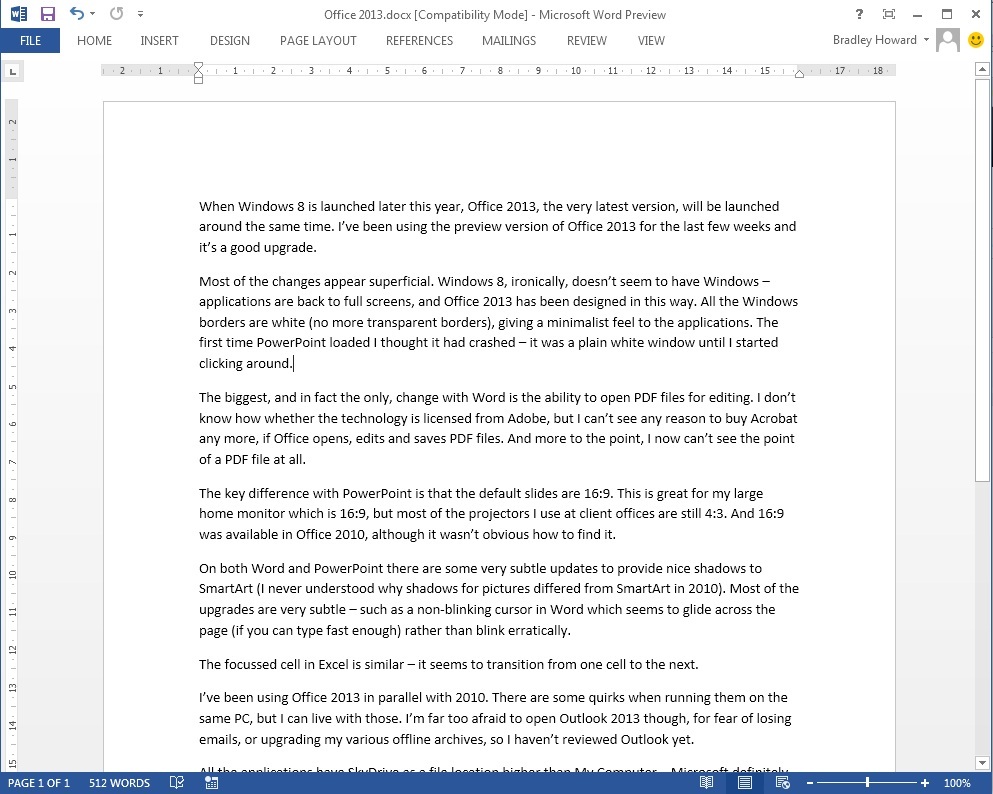 When Windows 8 is launched later this year, Office 2013, the very latest version, will be launched around the same time. I’ve been using the preview version of Office 2013 for the last few weeks and it’s a good upgrade.

Most of the changes appear superficial. Windows 8, ironically, doesn’t seem to have Windows – applications are back to full screens, and Office 2013 has been designed in this way. All the Windows borders are white (no more transparent borders), giving a minimalist feel to the applications. The first time PowerPoint loaded I thought it had crashed – it was a plain white window until I started clicking around.

The biggest, and in fact the only, change with Word is the ability to open PDF files for editing. I don’t know how whether the technology is licensed from Adobe, but I can’t see any reason to buy Acrobat any more, if Office opens, edits and saves PDF files. And more to the point, I now can’t see the point of a PDF file at all.

The key difference with PowerPoint is that the default slides are 16:9. This is great for my large home monitor which is 16:9, but most of the projectors I use at client offices are still 4:3. And 16:9 was available in Office 2010, although it wasn’t obvious how to find it.

On both Word and PowerPoint there are some very subtle updates to provide nice shadows to SmartArt (I never understood why shadows for pictures differed from SmartArt in 2010). Most of the upgrades are very subtle – such as a non-blinking cursor in Word which seems to glide across the page (if you can type fast enough) rather than blink erratically.

The focussed cell in Excel is similar – it seems to transition from one cell to the next.

I’ve been using Office 2013 in parallel with 2010. There are some quirks when running them on the same PC, but I can live with those. I’m far too afraid to open Outlook 2013 though, for fear of losing emails, or upgrading my various offline archives, so I haven’t reviewed Outlook yet.

All the applications have SkyDrive as a file location higher than My Computer – Microsoft definitely making that move to the Cloud. SkyDrive is good, but it’s just not as good as Dropbox. Dropbox cleanly extrapolates Cloud storage for the end user. SkyDrive still shows temporary directories when you save files there – it just isn’t as clean.

However if you open SkyDrive from a browser, you can edit the documents inside the browser – just like Google Docs. Like so many Microsoft products, it’s 90% of the way there, it just needs some finessing.

Is Office 2013 worth upgrading to? Sure, it looks much, much nicer. If you think this sounds too vain, you’re right. I can’t find any new features of the type which Office 2010 gave us over its predecessor such as SmartArt, and the auto correction.

Do you need to upgrade to 2013? No. When you get Windows 8 though, you may well want a cleaner interface though.