If I’ve bumped into you during the last 3 or 4 weeks, I’ve probably mentioned the book I’ve been reading – Future Files by Richard Watson.
My introduction to the book began in the reception of a creative agency in central London. I picked up the book from the coffee table and thought the front and back covers described a shallow author who claimed to be a ‘futurologist’.
“What a great idea – write a factual book that no one can argue with (or at least, for the next 50 years)”, I mocked. “Worse still, he works for some sort of futurology consultancy”.
I shared my views of the book to a colleague, and opened it half way. Hmmm, it seemed quite interesting.
Knowing that I had a trip to the New York the next week, I got back to the office and bought a copy from Amazon.
Since the moment it arrived, not only did I have difficulty putting it down, I had difficulty not discussing a number of the points raised in the book with pretty much anyone I met.
The opening chapter pretty much agreed with my original assessment – here was a guy who was interested in articles that described future trends, and decided to make a reasonably light hearted living from it. 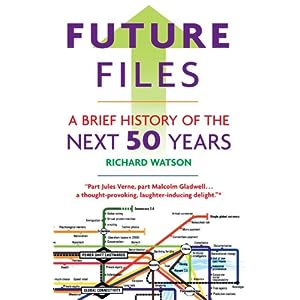 via amazon.co.uk
The difference between this book and other futurology books and documentaries is that it only brushes on technology. It’s not written by a technologist. This means that Watson often refers to social impact and psychological effects of future events.
For instance, it’s hard to deny that we’re all obsessed with covering our work surfaces, home surfaces, and even our hands, with antibacterial spray. However it’s the generation before us, who never used the spray that are living the longest, and more children are being born with allergies. I’ve digressed. Watson predicts that in the future we all have defibrillators in the home, blood test machines that send the digital samples via the Internet to a doctor the other side of the World (which we’ll use daily), and so on… we will become more and more paranoid in the future.
How can we tell if Watson is right or not – well we can’t. However he did predict the global recession triggered by banks and debt (he wrote the book in 2007), and quite honestly, I don’t care if his predictions are true or not… the point is that trends are going in a direction and he’s trying to see how they are linked together and what the sum of all the parts will be like. For instance I disagree with him about the availability of ‘free’ – my personal opinion is that we are at a peak in terms of free products and content – and our children won’t believe what we have access to in 2010, for no cost.
Watson has produced a map of all the trends that he keeps a tabs of. The maps are available here:
http://www.nowandnext.com/?action=misc&subaction=trend_maps
In a nutshell, if you want to read a book that predicts flying cars, interplanetary transport, Warp speed motorbikes or Internet links implanted in our brains, don’t buy this book. If you want a glimpse into the kinds of things that may affect our children and their children in the future, it’s definitely worth a read.
My apologies to Richard Watson for the initial mocking – it just proves you can’t judge a book by it’s cover.

3 thoughts on “Reading the Future”