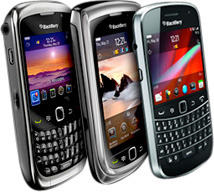 Recent news about RIM, the makers of Blackberry mobile handsets (when did people stop calling them mobile phones?) pulling out of the consumer market and maybe even putting themselves up for sale, got me thinking about other high profile, modern companies emerging, peaking and struggling in a short timescale.

Think about companies such as Blockbuster and TomTom.

Note that I’m not including short term, boom and bust .com-style companies from 2000, or more recent companies. I’m including companies that created a new market and had great profits for a period of time.

I hope that RIM recover. They found the ‘killer app’ – email – to drive smartphone usage into 21st century levels, at which point companies such as Apple and Microsoft improved the experience (mainly by moving the keyboard on to the touchscreen). However with technology become more consumer centric, I don’t think that exclusively targeting the corporate market is a successful move.