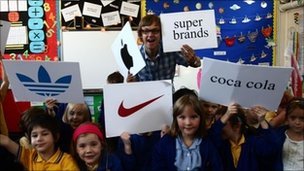 Last night on BBC3 (why BBC3??) was the first part of a three part documentary on Superbrands, and why they mean so much to us. Last night’s episode was on Technology, with next week investigating Fashion.

You can watch the Superbrands: Technology version here on iPlayer.

The series is well produced with a Louis Theroux style presenter, Alex Riley, who you can’t tell if he’s mocking his interviewee or being serious.

In case you don’t watch the episode, (and even if you do, I’m not giving too much away), the crux of the episode was “Why are Apple, Google, Microsoft, Facebook and Sony such powerful brands, and Nokia not so powerful? After all, Nokia is still the largest handset manufacturer in the World, and has more handsets out there.”

One of the light hearted parts of last night’s programme is that various groups of people were asked to describe these brands as if they were a personality. These groups included primary school children and older children, to people in the street. Facebook was described as “your mate in the pub who knew everything about everyone and bought you a drink as you walked in, but you weren’t sure if your wallet was safe with them.” Microsoft was the “middle aged BMW driver” – not bad for the company who produce the hippest games console.

The programme’s conclusion was about Control:

The programme was highly entertaining however I can’t say I learned anything new from it, except the Xbox-has-no-Microsoft-branding and the scientific (via MRI scan) similarity with brand loyalty and religion.

Thinking of other superbrands with similar levels of Control, Visa is another great example. It’s a Superbrand in the Control category because as soon as you pay for an item in a supermarket with your card, or online, you have regular reinforcement of the brand. The logo on your card, to Verified-by-Visa (I’m not saying V-B-V is a good thing) if you’re shopping online. And Visa has similar levels of Control of the successful technology superbrands because they understand spending data across retailers, which virtually no one else has. Actually, Akamai has probably more data about consumer behaviour, but is a B2B brand rather than a Superbrand.

I’m looking forward to next week with Superbrands: Fashion.