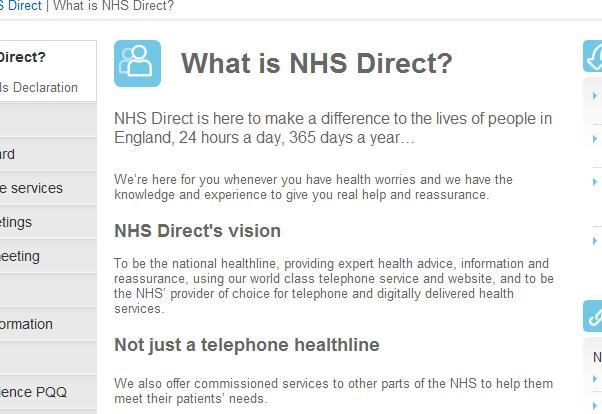 I was disappointed to hear that the government have decided to shut down NHS Direct for a number of reasons.

On a personal note, as a family we have used the service many times. With four young kids we have all sorts of germs and knocks each month, and we’ve always received a good service from NHS Direct.

As a concept I think the service is spot on. When we were on holiday last week, one of us felt a bit under the weather. The local hospital was glad to see tourists, for a few hundred pounds on the first consultation. We had travel insurance, but to lay out the money and the aggravation of going to A&E on hospital just didn’t appear. Whilst looking through the travel insurance documentation I noticed a phone number to speak to some private nurses, free of charge for the policy. After a quick call they gave a satisfactory opinion, some confident reassurance and suggested remedy. We took their advice and 24 hours later the problem had gone, with no inconvenience of having to claim back any expenses later when we returned from holiday.

If you try to imagine how healthcare will operate (no pun intended) in say, 25 years, I think we’ll have a lot more remote healthcare. We will sit at home and have a video call with a doctor based anywhere in the World. As for how the doctor performs his tests (temperature, blood pressure and so on) – these devices are already available with USB connectivity (e.g. this BP monitor or this thermometer patent request), to send your results through immediately.

Maybe NHS Direct is ahead of it’s time. When I speak to Americans, they are totally envious of our NHS, including NHS Direct. The thought of phoning a service that provides medical assurance (I would imagine this covers half the calls – and keeps the people who just want reassurance out of A&E) and advice – all without providing a credit card, is alien to most countries around the World.