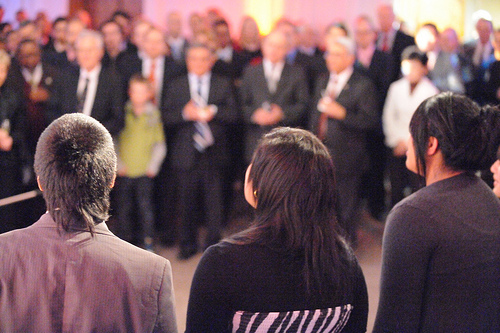 I haven’t written about social media that much recently after a few readers inside and outside of work criticised this blog for talking about it too much. Lo and behold I was in a meeting recently and asked “I don’t see where Google+ fits in with Facebook and LinkedIn, what’s Google’s strategy?”, of which the answer was worth recapping here.

Facebook started as a platform to link people (“friends”) together. As people used it more and more, messages became more popular, and then businesses started moving in, realising the power of recommendations between social groups.

The problem Facebook has is that everything on Facebook is (or at least feels) quite personal – not private per se, and not necessarily rude, but the kind of stuff I don’t want my business colleagues, customers or suppliers to be reading. I don’t bring in printed photo albums into meetings to share with them, so I don’t want them looking at my holiday snaps on Facebook for the last few years either.

So when I’m investigating a new website for a customer, and I see a ‘Facebook Connect’ signup process, 99% of the time I avoid using it, and fill in the forms separate to Facebook.

One final note on Facebook – we all have tens if not hundreds of “friends” on Facebook. Think about the question that if you wanted to categorise them all into groups, such as “close friends”, “acquaintances”, “work colleagues” and so on, how long would it take? Hold the answer…

LinkedIn started as a platform to connect business people together. There are two main reasons for this.

The first is as a job hunting tool; it’s a huge job board full of candidates. It’s one of those perfect balances between supply and demand – lots of people looking for a job and lots looking for a candidate.

The second use is as a sales tool, literally to network with contacts to find out who works within a specific organisation. It’s the ultimate tool to stop the “If only you would have told me you wanted to know someone who works for Company Y, I’d have told you” conversation from happening after spending hours of cold calling.

LinkedIn has stuck to its core focus since day one. It’s remained targeting professional users and staying away from the social (traditional definition) side.

Google have some key advantages with their social network. On the one hand, they have a fantastically high number of users who log in – some 260 million Gmail account users.

As a quick aside – this shows how undervalued Yahoo! are, with 310 million email users. Hurry up, buy Yahoo! and convert these huge traffic figures into massive revenue.

Back to Google+ again – Google has tried and failed a few times (which gives it an immediate experience advantage) to create a social network, and has now launched Google+.

And due to the maturity of the web, and especially some HTML coding techniques, has managed to create an environment which from day one allowed users to setup all their contacts into distinct groups. I asked the question above of how long it would take you to organise your “friends” into groups – and I haven’t met anyone who can be bothered to do so.

So Google has cracked the Facebook (social) and LinkedIn (professional) overlap. It’s very easy to have content which is only visible by social contacts and/or professional contacts. It also has dozens of brands committed to using the platform as well. And don’t forget – advertising agencies spend billions of pounds a year with Google’s advertising platforms. Having the agencies on board from day one is a major advantage.

In truth I think all three networks are here for the medium to long term. They are not mutually exclusive, and there are tools to link them together. I think brands should be building apps and brand pages for each of the networks –obviously adopting a different approach for LinkedIn compared to the other two.

Photo courtesy of US Embassy New Zealand on Flickr