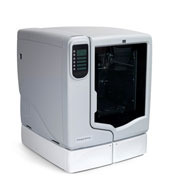 One of the things I think will take off in the next couple of years is 3D printing.

I’m not a massive fan of 3D tellies and cinema films, so this is not another 3D fad… 3D printing is about making real objects in the real world from home, rather like a dozen things around the room you’re in at the moment, all from a block of plastic.

Like my post on the R2 robot earlier this week, 3D printing hasn’t had a great deal of publicity, however I think it will be a massive game changer.

In 10 years time you won’t go to the supermarket to buy disposable plates, cutlery, plastic cups, in fact anything that is plastic and is under say, 30 cubic centimetres and without any electronics inside, will be made inside our homes. We will buy blocks of plastic and feed it into our 3D printers.

In the near future, when we need 25 plastic plates for a picnic, we’ll make them at home.

There are already a few 3D printer manufacturers, and HP has used it’s ‘Jet brand of printers to extend into the 3D arena. Their DesignJet is a little over £10,000 at the moment, though I reckon an affordable home version will be available within a few years.

The technology is improving at a rapid pace. When I was on holiday in Israel during the summer I spoke to someone who had seen a 3D printer in action, and he criticised the technology for lack of intricacy, and the amount of time it took to create a simple object such as a cup. However both of these criticisms have been improved upon – some objects are now very intricate and detailed.